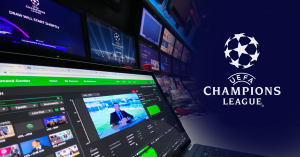 The social distancing and travel restrictions of the COVID-19 pandemic meant that representatives of the participating teams were unable to physically attend the draws and ceremony hosted at UEFA headquarters near Geneva, Switzerland. Therefore UEFA appointed TVU Networks to provide a turnkey remote production solution, allowing some of the participating clubs to attend live from their respective home locations, as well as providing on-site technical and training support for the clubs and at UEFA headquarters.

Many of Europe’s top clubs, from across the continent, attended both draws, including eventual UEFA Champions League winners FC Bayern Munich, and Europa League winners Sevilla FC. To connect each location, the remote production set-up had to include: return audio feeds, mix minus feedback elimination for team member interviews, synchronized intercom communication for the camera operators at each site, and transmission with less than one second delay.

For the awards ceremony, TVU Networks delivered turnkey packages to some of the attending clubs at their home location. Each TVU production package included: a camera operator, technical and training support, TVU One mobile transmitters and the TVU Anywhere mobile broadcasting app for transmission redundancy. Live feeds from the remote locations were sent to Radio Télévision Suisse (RTS) studio in Geneva for final production and broadcast on the UEFA website and on other major sport channels throughout the world.

“We are thrilled with UEFA’s confidence in our remote production solution,” said Rafael Castillo, VP of Europe, TVU Networks. “UEFA has always been a technologically progressive organization with the highest standards. And their UEFA Champions League draws are prestigious live events with a huge worldwide audience. There’s no room for error. The success of both events was a solid affirmation of our remote production technology.”

The Champions League final match is one of the most watched sporting events in the world.

TVU Networks is a global organization with more than 3,000 customers using its IP and cloud-based workflow solutions across multiple industries including news, entertainment media, sports, corporate, streaming, houses of worship and government. Through the use of AI and automation driven technology, TVU helps broadcasters realize an efficient metadata and story-centric workflow through its TVU MediaMind platform for live video content acquisition, indexing, production, distribution and management. The company has been on the forefront of developing the tools needed to revolutionize and streamline the Media Supply Chain. TVU is a critical part of the operations of many major media companies worldwide and is a Technology and Engineering Emmy® Award winner.

UEFA – the Union of European Football Associations – is the governing body of European football.  It is an association of associations, a representative democracy, and is the umbrella organisation for 55 national football associations across Europe.

Its objectives are, among others, to deal with all issues relating to European football, to promote football in a spirit of unity, solidarity, peace, understanding and fair play, without any discrimination on the part of politics, race, religion, gender or any other reason, to safeguard the values of European football. UEFA also promotes and protects ethical standards and good governance in European football, maintains relations with all stakeholders involved in European football, and supports and safeguards its member associations for the overall well-being of the European game.